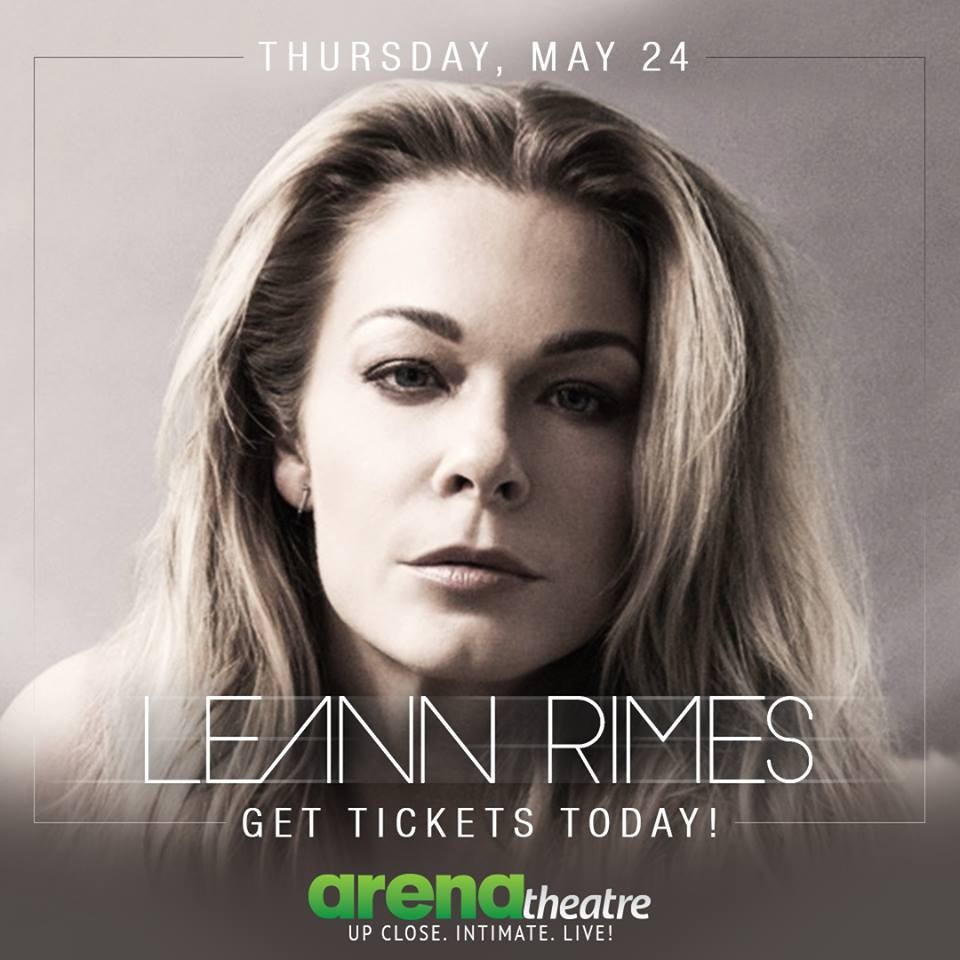 Multi-platinum, award-winning country artist LeAnn Rimes comes to Houston’s Arena Theatre May 24. LeAnn burst onto the scene and enthralled country music fans with her debut single,”Blue,” when she was just thirteen years old, the youngest star since Tanya Tucker. Such was her star quality that with that hit, she became the youngest artist to win a Grammy, and the very first country recording artist to win the Grammy for “Best New Artist.”

Her rich, emotive voice, even at that age, was reminiscent of Patsy Cline, and industry talk of her being the successor of Patsy’s legacy was no accident. The song “Blue” had been given to her to record by its author, Dallas DJ and promoter Bill Mack. He had written the song years before for Patsy Cline, but she had not recorded it before her untimely death.

At the time, LeAnn was already a seasoned performer. At five, she was taking voice and dance lessons and performing in local talent shows. She began in musical theatre, almost taking the title role in “Annie” on Broadway. She appeared and was a one week champion on the national television talent competition, “Star Search,” and was making records with her father on an independent label. When Mack discovered LeAnn, he felt the “Blue” would be perfect to launch her to mainstream stardom. He proved right. In addition to the Grammys, she won the Country Music Association’s “Horizon Award” for Best New Artist Of The Year, becoming the youngest person to ever be nominated and win a Country Music Association award.

Subsequent albums such as “Unchained Melody: The Early Years” – a compilation of previously recorded material – and “You Light Up My Life: Inspirational Songs,” continued her success. Different recordings have transitioned between country and pop and back to country, and her powerful, distinctive voice has given each authenticity. Rimes has placed 42 singles on the Billboard Hot Country Songs chart, 13 of which are top-10 hits, and has scored numerous hit singles in her career, including “Can’t Fight the Moonlight” which went #1 in 11 countries, and “How Do I Live,” which is the second longest charting song ever on the Billboard Hot 100 chart. Recordings include Christmas albums and duets with many of country’s greatest stars.

Rimes is as an accomplished actress and author, including writing two children’s books Jag and Jag’s New Friend, as well as the novel, Holiday in Your Heart and the inspirational book What I Cannot Change. She also has a new book focusing on life’s crossroads. In an interview with Billboard Magazine she said, “”I fully embrace the journey I am on and have a deeper understanding of how every piece of my story serves a purpose in my evolution as a woman and an artist.”

LeAnn has long-supported a variety of charity organizations including advocating for the National Psoriasis Foundation, The Coalition to Salute America’s Heroes and StandUp For Kids. She most recently began work with The Trevor Project, an organization that provides crisis intervention and suicide prevention services to lesbian, gay, bisexual, transgender and questioning youth.