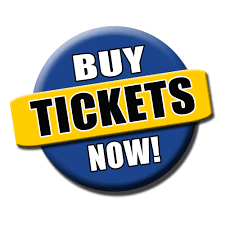 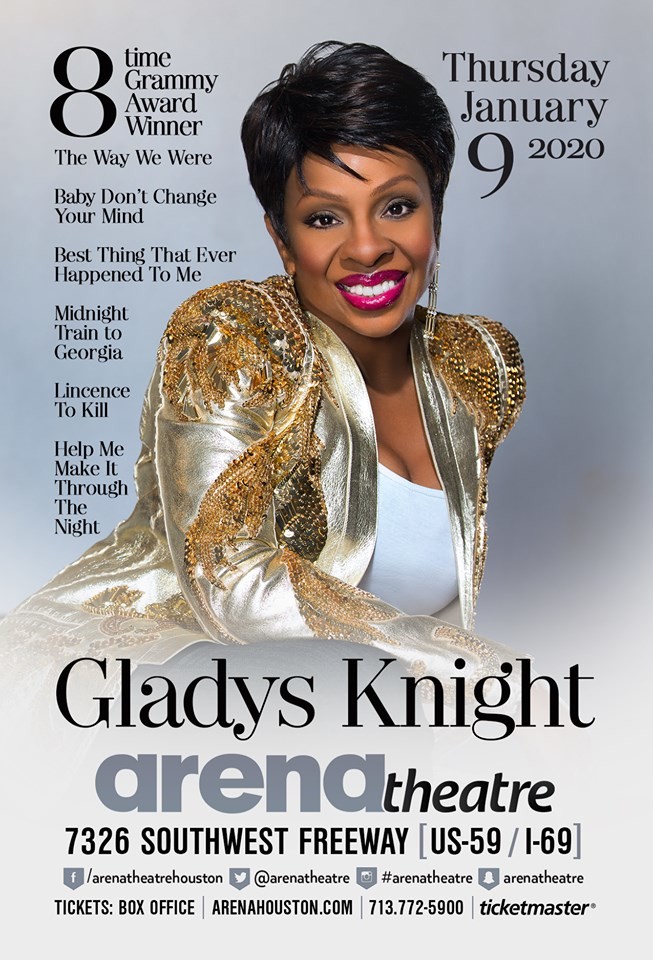 One of the great soul singers of all time, eight-time Grammy winner Gladys Knight, rolls the “Midnight Train to Georgia” into Houston’s Arena Theatre on January 9, 2020. The legendary gospel and Motown performer, known as “The Empress of Soul,” shows no signs of slowing down. Indeed, she had a unique full-circle experience when she again became another talent contest hopeful on TV’s “Dancing With the Stars” sixty years after winning “Ted Mack’s The Original Amateur Hour” TV show contest at the age of seven. In between, she has constantly worked to improve and expand her talent, from different collaborations and exploring musical styles to taking on acting roles to critical acclaim.

The year after winning the Original Amateur Hour, eight year-old Gladys, her brother Merald, sister Brenda, and cousins William and Eleanor Guest banded together to form the group “The Pips.” Brenda and Eleanor left to be replaced by Edward Patten and friend Langston George, creating the signature sound of Gladys’ soulful voice backed by a smooth, male chorus with tight group choreography. They made the Top Ten in 1961 with “Every Beat of My Heart.” They recorded pop-soul sides in the early and mid-’60s including top 40 hits, “Letter Full of Tears” and “Giving Up,” but didn’t hit their commercial stride until moving to Motown in 1966.

Steeped in the gospel tradition, Gladys Knight & the Pips developed into one of Motown’s most dependable acts, scoring big hits with some rabble-rousers such as “Friendship Train” and the original recorded version of “I Heard It Through the Grapevine”; mainstream mid-tempo soul like “It Should Have Been Me” and “The End of Our Road”; and smooth ballads like “If I Were Your Woman.”

In 1973, Knight had her biggest Motown hit with “Neither One of Us,” which made number two. Moving to the Buddah label, a string of hits followed, including the smash number one “Midnight Train to Georgia,” “I’ve Got to Use My Imagination,” and “Best Thing That Ever Happened to Me.” All told, Knight has recorded more than 38 albums over the years, including hit solo albums “Good Woman,” “Just for You,” the inspirational “Many Different Roads,” and “At Last.” Adding to her already impressive collection, Knight won another Grammy for her duet with the late Ray Charles on his posthumous album Genius Loves Company (2005).

The awards and accolades are many and well deserved for such a long and distinguished career. Knight was honored with the “Legend Award” at the 2011 Soul Train Awards. A longtime Las Vegas resident, she became the first African- American performer to have a venue named after her in Las Vegas: the Gladys Knight Theater at the Tropicana. She has been honored by numerous organizations, including the NAACP Legal Defense Fund, Congress of Racial Equality (CORE), B’Nai Brith, and is a recent recipient of BET’s Lifetime Achievement Award. Her identification with her iconic hit “Midnight Train to Georgia” led to her becoming the national spokeswoman for Amtrack.

A dedicated humanitarian, Knight is a staunch supporter of the Boys & Girls Club of America. In 2011, she reunited with Elton John, Dionne Warwick, and Stevie Wonder for 25th anniversary of their historic “That’s what Friends are for” performance benefiting AIDS research. Her highly anticipated jewelry line combines fashion with an effort of social consciousness, including handcrafted beads produced by West African artisans and cooperatives, with a portion of the sales going back to the Kumasi Women’s Cooperative in Ghana. Knight has devoted to various worthy causes, including the American Diabetes Association – for which she is a national spokesperson, the American Cancer Society, the Minority AIDS Project, amFAR and Crisis Intervention.

A tireless performer who still wows audiences around the country and the world, Knight has also found time over the years to make forays into film, television, and theater. In 1986, she showcased her acting ability when she co-starred with Flip Wilson in the CBS comedy “Charlie & Co.” Other acting roles followed on TV and television films. In 1999, she completed a starring run on Broadway in the smash musical hit “Smokey Joe’s Café.” She credits her faith in God as the driving force behind all of her endeavors, guiding her through her many successes.